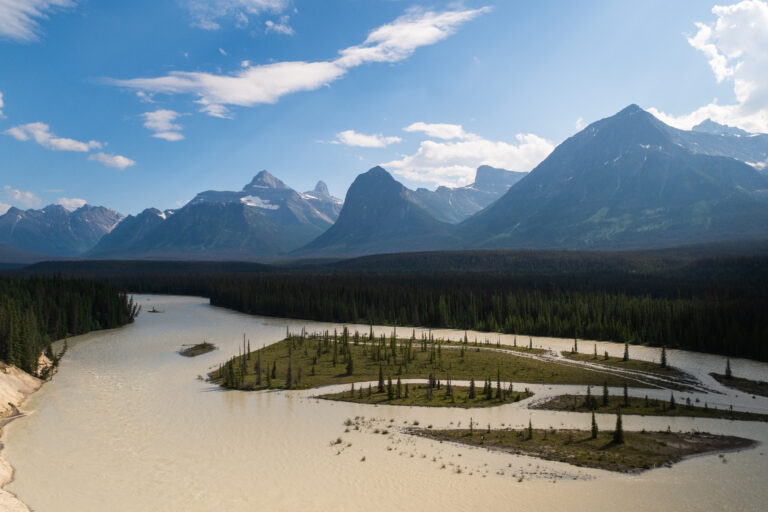 The drive from Jasper to Banff along the scenic Icefields Parkway in the Canadian Rockies is ranked among the top road trips in the world. Along the drive between Banff and Jasper you’ll see mountains and glaciers rise dramatically overhead while wildlife roams freely.

The Icefields Parkway runs from Lake Louise to Jasper, which are both fantastic places in themselves. You can drive the Icefieldss Parkway in either direction and on multiple days.

The Drive From Jasper To Banff

The drive between Jasper and Banff is 288 km (179 miles) and takes around 3:30 hrs. Two highways connect the small mountain towns, the Icefields Parkway (AB-93) and TransCanada Highway (AB-1).

If you Google it, Google Maps will show you that the drive from Jasper to Banff or Banff to Jasper will take about 3 hr 25 min (288 km). You will not make it less time, nor should you, as it’s a beautiful drive worthy of the entire day.

If you were to drive straight through without any stops, the drive will take you between 3.5 and 4 hours. However, you should expect the drive to take you at least 5 hours in the winter and the summer, but it’s best to plan to be driving between Jasper and Banff all day. The reasons the drive between Banff and Jasper takes longer than calculated are for the following.

How Long is the Drive Between Jasper and Banff?

The fastest you could drive the entire parkway is around three and a half hours. Though, just driving straight from Jasper to Banff, 288 km, in one sitting without a stop would be a real shame. There are a plethora of gorgeous vistas, glaciers, waterfalls, and hiking trails along the highway. We’ll break down our favorite places to stop below.

Where To Stop Between Jasper and Banff

There are a plethora of worthy stops on the drive from Jasper to Banff. Even if you had a month, there would still be plenty left to explore, especially for hikers. Below are several highlights along the way. You can read our post about the best stops along the Icefields Parkway for more information.

The Best Hikes Between Jasper and Banff

If you want to get out of the car and stretch your legs, there are many hikes to enjoy between Banff and Jasper. Some of the best actually along the Icefields Parkway are:

The drive from Jasper to Banff is great no matter the season. Even in the winter, the Icefields Parkway is open unless avalanche conditions are too high during winter storms — closures rarely last more than a day. Many people would say the best time to drive the Icefields Parkway is in the summertime, between mid-June to early September. This is when the days are long, the wildflowers are blooming, and the lakes are in their prime.

In the winter, drivers should be prepared for winter driving conditions. Snowstorms are frequent in the winter, and ice is always present on the road during this time. Services are seasonal, so restaurants, accommodation, campsites, and fuel stations along the parkway close from November to April.

Fuel stations are available in Jasper and Lake Louise at a distance of 232 km; ensure to fill up before driving the road. The TransCanada segment of the drive is typically in better condition, but it’s very common to find one lane of the road covered in ice and snow.

Summer is obviously the best time to drive between Jasper and Banff, but I would not let it detract you if visiting in the winter. The ski and winter sports are far better in Banff than in Jasper. Banff also serves as a great base for ski resorts in the greater region, like in Golden (Kicking Horse Ski Resort) or Invermere (Panorama Ski Resort).

Wildlife on the Road from Jasper to Banff

There is a plethora of wildlife along the Icefields Parkway. So be prepared to see deer, elk, mountain sheep, and, if you’re lucky, a bear or coyote. We almost always see a bear when driving from Jasper to Banff, but they tend to stay away from traffic and noise pollution. You’ll probably be tempted to pull over if you see wildlife, but it’s best not to do this. This is what we call a “Bear Jam” and is a real problem in the park.

Once one person pulls over to get a closer look at a bear, another car pulls over, and another, and so on. Eventually, people get out of their car taking selfies (yes, I’m serious), which is dangerous to you and wildlife.

Parks Canada discourages pulling over for bears and has even made it illegal for buses to do so. They can issue tickets too. So if you see a bear on the road, slow down and admire it from the car, and do not stop and cause a traffic jam, please. If there is a pull-off or parking lot nearby, feel free to stop, but still, give the animal some space.

Services Along the Drive from Jasper to Banff

Fuel from Banff to Jasper

There aren’t many gas stations on the Icefields Parkway, so you will really have to plan accordingly. If you’re coming from Jasper, then fill up there. There is only one service station at the Saskatchewan River Crossing between Jasper and Lake Louise. It’s only open in the summer, and they charge a premium for fuel.

The only other fuel between the drive from Jasper to Banff is at Lake Louise village. The gas stations in Lake Louise are open year-round. You don’t want to run out of fuel on the Icefields Parkway, especially in the winter, so always make sure you have enough.

There are a few times along the Icefields Parkway where you will be able to make calls and check emails if need be. I typically get a signal at the Saskatchewan River Crossing and Columbia Icefields Center, but that’s it (but not in the winter). Unplug and enjoy nature – it’s what you’re here for! The TransCanada section of the drive has cell service.

It’s best to pack your own food when driving from Jasper to Banff. Pick up groceries in either Banff or in Jasper and enjoy those while on the road. If you miss food in Banff, your last stop for snacks for a while is in the Lake Louise village.

There are two gas stations with a few convenience store items, though the Petro Canada has more on offer. In Lake Louise Village, there is The Village Market, which is a small grocery store with limited hours. Beyond that, you can grab a quick bite at either the Trailhead Cafe or Laggans.

There is not much in terms of food or restaurants once you get on the Icefields Parkway. If you have missed food in Jasper, Banff, or Lake Louise, you can stop at the Saskatchewan River Crossing, where there is a mediocre buffet-style restaurant and overpriced snacks, or at the Columbia Icefields Center by Athabasca Glacier, which offers amazing views but forgettable expensive food.

Keep in mind the Columbia Icefield Center and Saskatchewan River Crossing are both closed in the winter.

Thankfully there are more restrooms options along the Icefields Parkway than food options. Flush toilets can be found at Lake Louise Village, the Columbia Icefield Center, and Saskatchewan River Crossing.

You will need a Parks Canada Pass to drive on the Icefields Parkway, and there are booths just as you’re leaving Lake Louise and as you leave Jasper to check if you have them. You can purchase a Parks Canada pass at any park gate. Or you can buy them in advance online.

A Parks Canada Discovery Pass gets you entrance to all Parks Canada destinations for the year is only $139.40 for a family. Day passes are $10 per person, so depending on how many days you are staying, you may want to consider the Discovery Pass.

If you have an entire Banff itinerary it’s best to get the Discover Pass which will last you an entire year.

Banff to Jasper by Bus

If you don’t feel like driving the parkway or you’d rather ride as a passenger to watch out the window, there are tour operators that can drive you from Jasper to Banff or vice versa.

Brewster Express offers a pickup service from any hotel in Banff, Jasper, Lake Louise, Kananaskis, or Calgary. They can help you conveniently plan your trip between the two destinations. Prices start at $38.50 CAD, but the price between Jasper and Banff is currently $120. Return tickets provide a discount.

SunDog Tours also operates a one-way tour that begins at Banff or Lake Louise and drops off in Jasper. It’s a full-day tour with many stops along the way and includes a four-hour stop at the Athabasca Glacier. They also operate a direct route from Jasper to Banff, which is part of their Calgary Connector service. It’s a daily service that operates in the winter between October and April.

Cameron Seagle is a resident of Canmore, Alberta. After traveling the world for six years, he settled down in the beautiful Bow Valley with Natasha. He has been featured as a travel expert with numerous publications worldwide and has spoken on several occasions about the power of travel. He has a passion for all things in the Canadian Rockies and loves to spend his time snowboarding, scrambling, camping, biking, and trail running. Conservation is a deep fundamental in his life, and he aims to inspire others to care about our natural world. 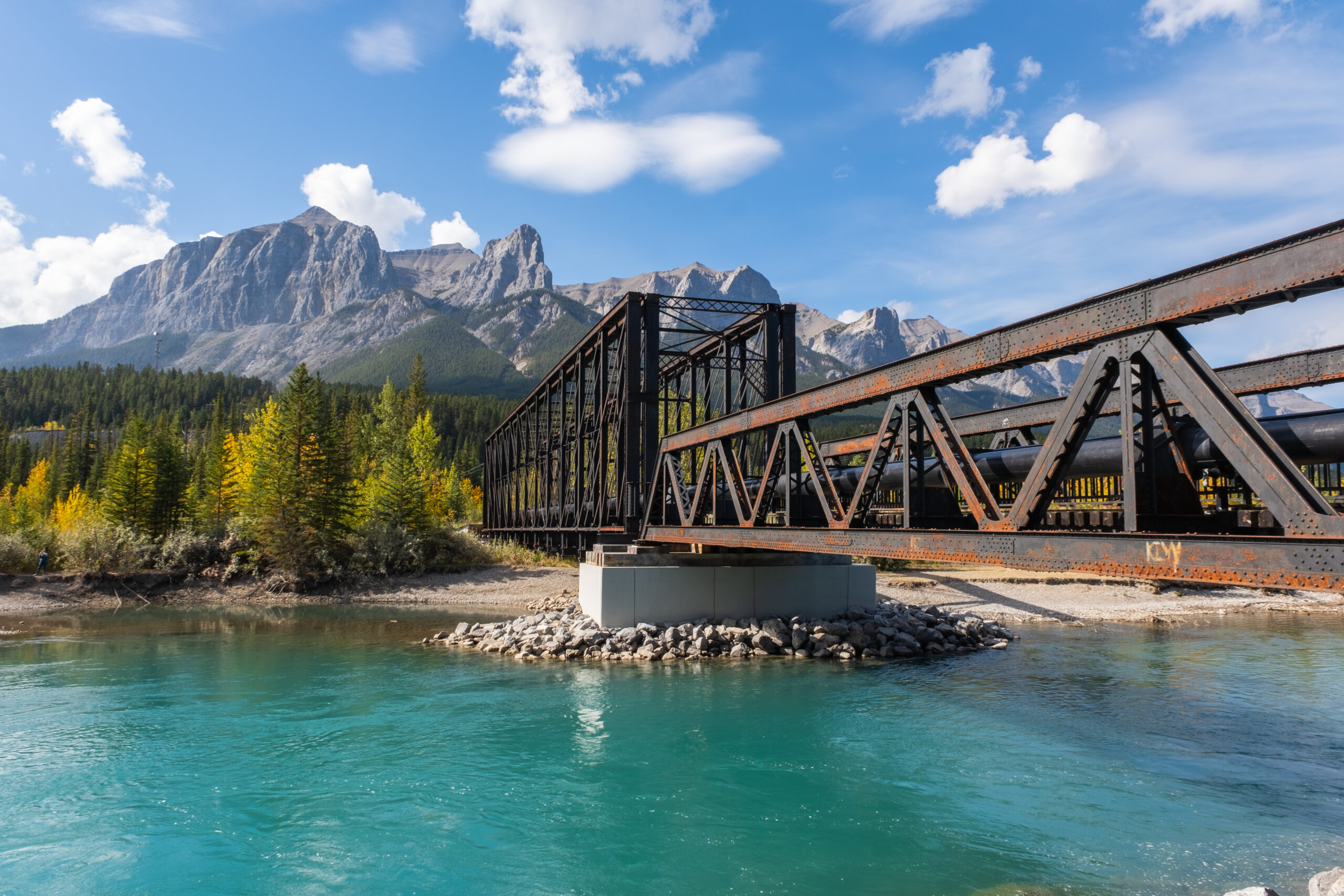 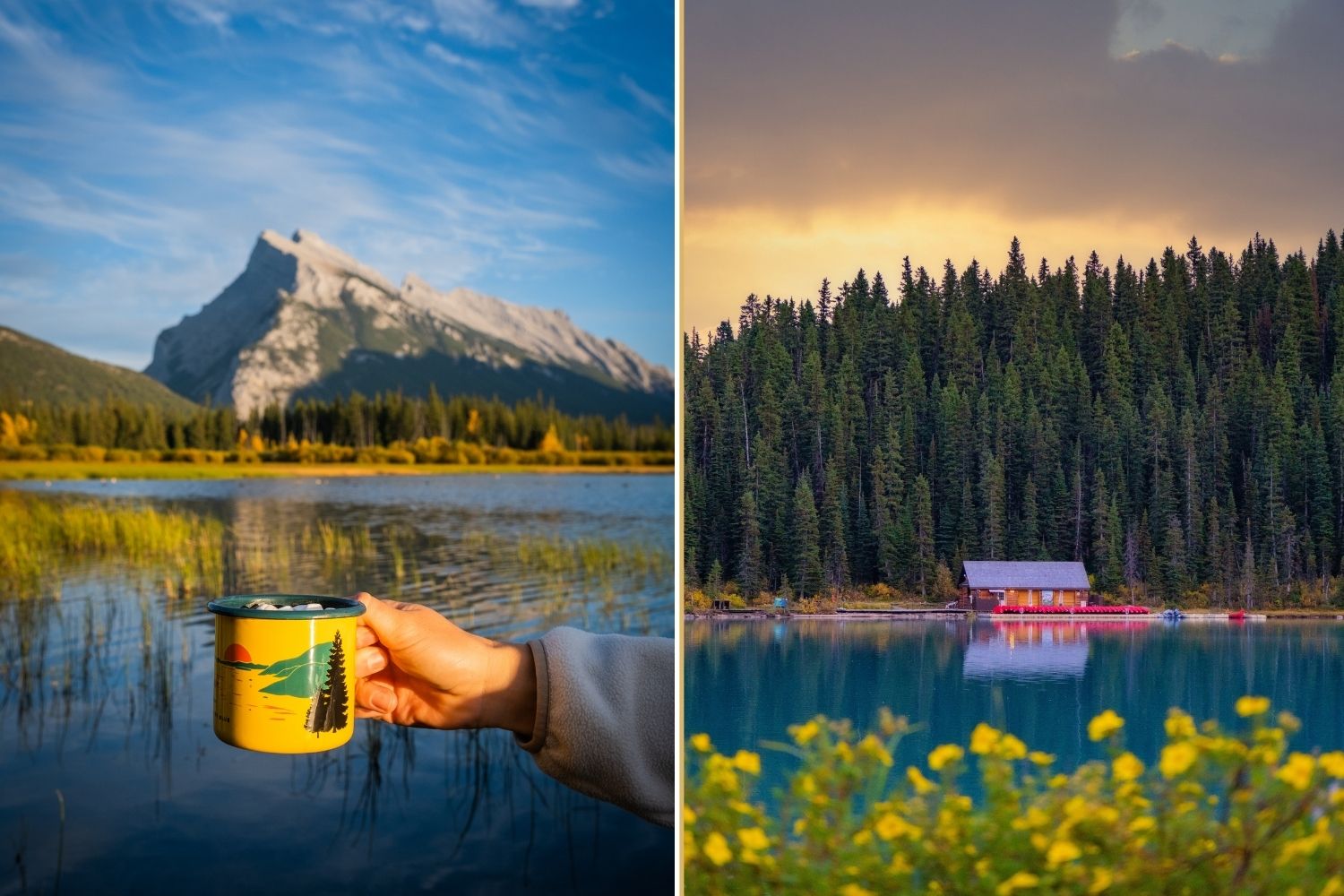 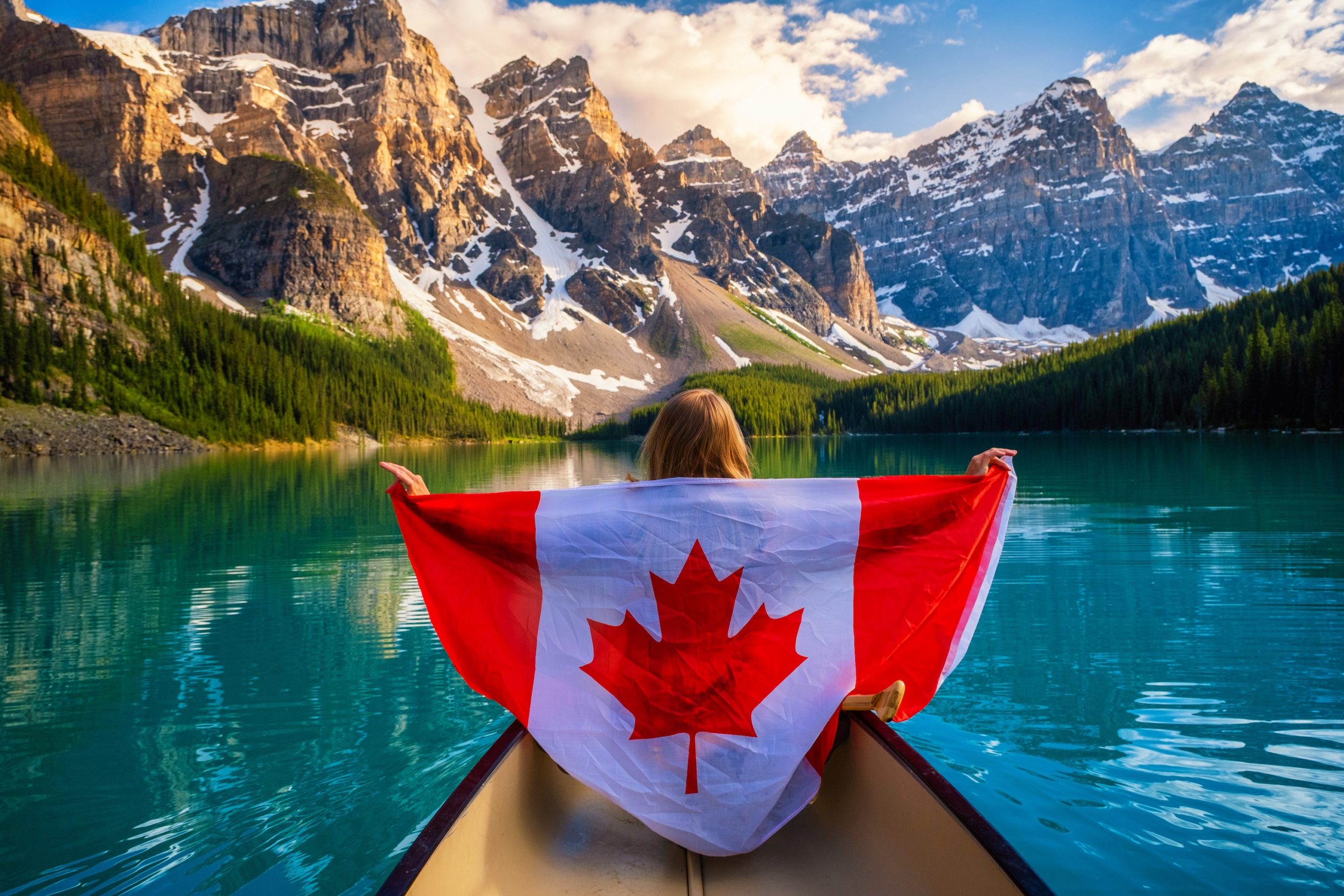