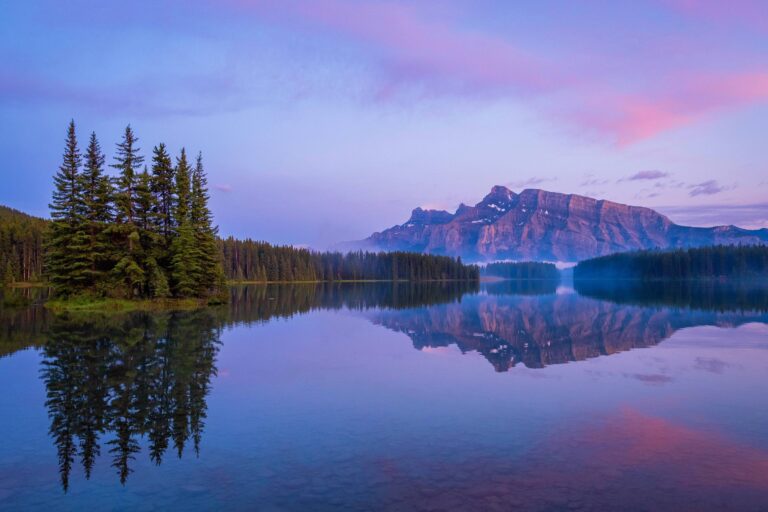 Two Jack Lake is a picturesque emerald green lake in Banff National Park with a sweeping view of Mount Rundle. The landscape attracts both visitors and locals in search of some fresh air. Its easy accessibility from the town of Banff makes it a great place to catch sunset or sunrise.

No matter the season, Two Jack Lake is always a great stop in Banff. During summer, visitors can enjoy swimming, kayaking, stand-up paddleboard, and hiking. In the winter, go for an ice skate, take some photographs, or snowshoe along the surrounding trails.

Two Jack Lake is one of the most photographed lakes in the Canadian Rockies due to its close proximity to Downtown Banff and easy access to the lake.

Two Jack Lake is about 10km from Banff and a 15-minute drive from the town center. You can also bike in on the Minnewanka Lake Loop Road in about 30-45 minutes for a more active route.

In the summer months, the lake is a great spot to spend an afternoon. However, on weekends, the lake’s banks are often crowded with people out to enjoy the sunshine, so I prefer to get out on the water in some form. Two Jack Lake is great for water sports like kayaking, canoeing, SUP, swimming, and fishing.

On a nice summer day, you’ll find a mix of visitors and locals alike who are after some time on the water. Since moving to the area, it’s the one lake we’ve spent the most time at because it’s accessible and a great spot to relax. If you only have an hour or two free in your Banff itinerary, Two Jack Lake is a great place to come.

While it’s easy to let the larger or more scenic glacial lakes like Moraine Lake, Lake Louise, or Emerald Lake steal the show, Two Jack Lake is well worth a stop for visitors.

Two Jack Lake is one of the most scenic views in Banff National Park and always makes for a great photograph, especially if you catch Two Jack Lake at sunrise or when the evening light hits Mt. Rundle.

In the winter months, the lake still makes for a fantastic scene. Early in the winter, when the lake first freezes over it’s possible to go ice skate on the lake.

Aside from ice skating, you can explore a bit on snowshoes, but in our opinion, there are far better places in Banff to snowshoe in the winter. It’s best in winter simply for the amazing landscape that makes for tremendous photographs. If you look hard, you can even see some of the famous methane ice bubbles.

Why is the Lake Called Two Jack Lake?

Two Jack Lake is named after two “Jacks.” The first was Jack Stanley, who operated a boat concession on Lake Minnewanka, and the second was Jack Watters, who worked at the mines in Bankhead (at the base of Cascade Mountain).

When Is The Best Time to Visit Two Jack Lake?

Two Jack Lake is technically a year-round destination, but to really enjoy the lake, it’s best visited in the summer months. The lake remains frozen and covered in a heavy layer of snow/ice during the winter months. The lake begins to freeze around December and will remain frozen until the end of May, when the lake unfreezes.

There are two lots for parking at Two Jack Lake that have a limited number of parking spots. The Lower Lot and the Upper Lot. On an average day, it’s not too difficult to get parking, but in the summer months, on a sunny weekend, the parking lot can fill up.

The peak times are from 10 a.m. to 3 p.m. You can still visit during these times, but be forewarned parking may be a struggle, and if you don’t get any parking, you are out of luck and should continue to Lake Minnewanka or Cascade Ponds to try your luck there.

There are some drop toilets, picnic benches, trash receptacles, and a small stone beach perfect for launching a canoe, SUP, kayak, or even a pool float at the lake. There are no canoe rentals at Two Jack Lake, but you can rent SUP for transport in Canmore at Bow Valley SUP or the Banff Canoe Club.

If you’re coming from Canmore or the area, you’ll get far better daily rates, almost half that of the Banff Canoe Club.

You have several options for easy access to the lake if you don’t want to drive and risk not being able to park. You can park at the Minnewanka Park & Ride or the Banff Train Station and hop on the Roam Transit (route 6), which will take you to the lake.

The bus route also stops at Lake Minnewanka, Johnson Lake, and Cascade Ponds. Rides are $2 for adults and $1 for children. The bus only operates in the summer months from May 17th to September 15th.

A small trail goes along the shoreline of Two Jack Lake, but it’s not really anything to note. It’s best enjoyed as an easy walk while enjoying a cup of coffee or taking in the views. That being said, there are several great Banff hikes around this area.

You can take a nice hike along Lake Minnewanka, hike to the Alymer Lookout, summit Mt. Alymer on its shoreline, or make a multiday backpacking trip out of it. One of our favorite hikes in the area is C-Level Cirque, as it’s a nice challenge that provides astounding views of the Bow Valley.

If you’re after an easy hike in Banff, check out nearby Johnson Lake, as it receives fewer visitors and has a really nice trail that circumnavigates the lake.

Can You Swim in Two Jack Lake?

If you’re in Banff around December, make sure to keep an eye on Two Jack Lake, as it typically freezes over enough to ice skate during this time. This is before snow builds up on the frozen lake surface so you can skate. The entire surface looks like a piece of glass, and the surrounding landscapes make for one incredible spot to go ice skating.

You’re permitted to fish on Two Jack Lake. To fish in the park, you must have a Park pass, fishing permit and be aware of current regulations. This means you know fishing limits and can identify the various fish within the park. No live bait fishing is allowed in the park.

Kids under 16 are allowed to fish on their accompanied pass, but their catch is included within the permit holders’ daily limit. For the most up-to-date fishing information, please reference Park Canada’s website as it changes seasonally.

However, the whole area is really wonderful as Two Jack Lake is gorgeous and nearby Lake Minnewanka is good for fishing, water sports, and hiking.

The Two Jack Lakeside campground also has 32 equipped campsites for $72 a night and includes everything you could need for camping. These equipped campsites have a 6 person tent, 6 sleeping pads, stove, propane, and a lantern. Visitors only need to bring a sleeping bag, food, and hiking clothes.

For additional comfort, you can book an oTENTik, exclusive to Parks Canada, which is essentially a cross between an A-frame cabin and a prospector tent. There are 10 of these at Two Jack Lake Lakeside, and they cost $122.64 per night, but they book out well in advance.

Guide to Camping in Banff

Two Jack Lake is one of the best places in Banff to paddle. There is nowhere to rent canoes, paddleboards, or kayaks at Two Jack Lake. You can rent equipment at the Banff Canoe Club or the Adventure Club on Banff Ave. They offer half-day and full-day rentals.

Get a Parks Pass to Visit Two Jack Lake

You need a Parks Canada pass to visit Two Jack Lake as it is located within Banff National Park.

You can purchase a Parks Canada pass at any park gate right before Two Jack Lake. Or you can buy them in advance online. A Parks Canada Discovery Pass, which gets you entrance to all Parks Canada destinations for the year, is only $145.25 for a family.

Day passes are $10.50 per person, so depending on how many days you are staying, you may want to consider the Discover Pass.

Holidays to Be Aware of at Two Jack Lake

Two Jack Lake is always busy in the summer, but you should take note of the following holidays as it’s even busier. It’s really packed on Canada day when everyone heads to the picnic area for a BBQ in the park.

Where to Stay Near Two Jack Lake

The closest places to stay near Two Jack Lake are in Downtown Banff. For a small mountain town, Banff actually has a surprising number of fantastic Banff hotels.

Other Things to do in Banff

If you are looking for the best things to do in Banff, we have you covered! We visited this little mountain town a few years back and fell in love so much that we decided to move to the Canadian Rockies. Check out what else you should add to your visit to Two Jack Lake. Some of the best things to do near Two Jack are to see Bow Falls, cycle the Bow Valley Parkway, or hike Johnston Canyon.

Hopefully, this helped you plan your visit to Two Jack Lake. 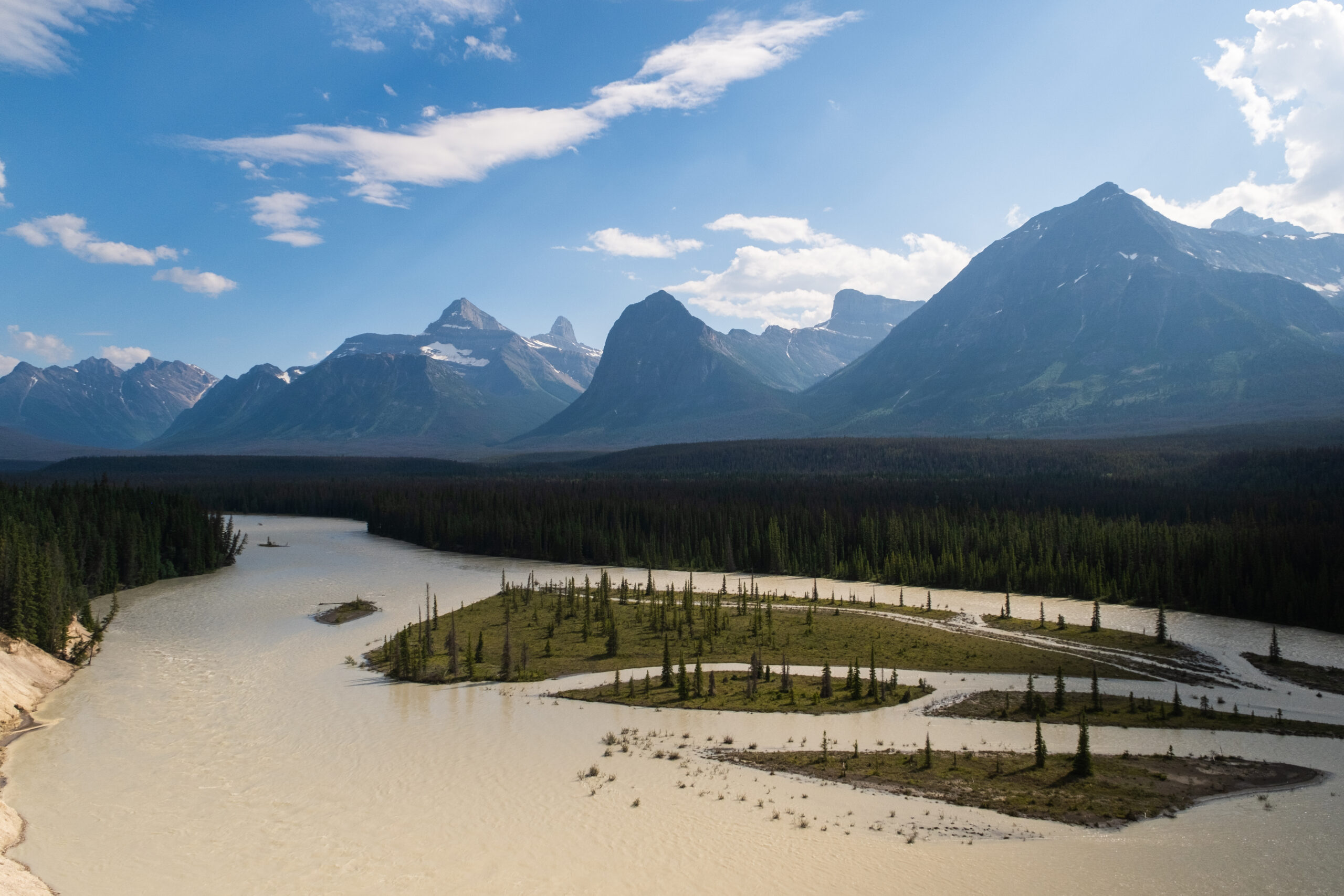 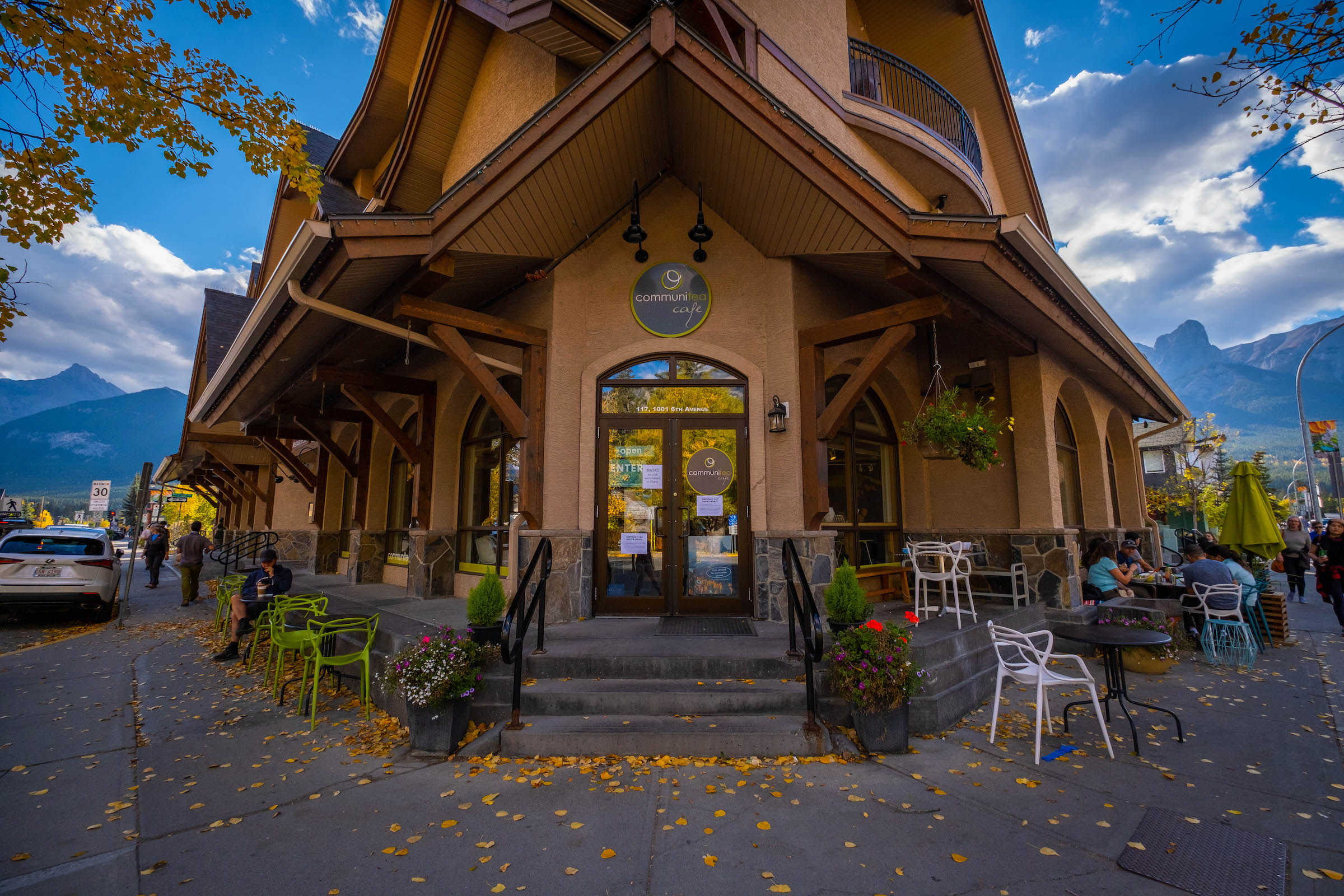