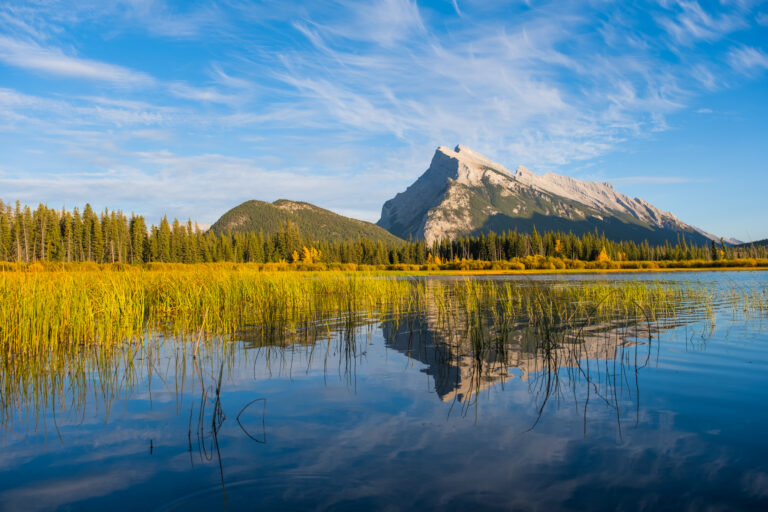 Many people think a trip to the Canadian Rockies will blow any budget, but visiting Banff doesn’t have to be expensive! There are so many ways to do Banff on a budget. It starts with choosing the the best time to go, from there you can choose cheaper accommodation, and the right transport option for you. We break it all down here!

Visit Banff in the Off Season

One of the top ways to visit Banff on a budget is by traveling to the Canadian Rockies outside the peak season. The busiest and most expensive time to visit Banff is in the summer. Summer in Banff starts in June and ends in late September. You’re probably not thinking that early June and late September sounds like summe in Banff, during these times it can be particularly cold. However, with school vacations people from all over the world travel to Banff in June, so prices go up around now.

They’ll stay high until late September. Late September is larch season in Banff. A magical time of year when the larch trees turn golden yellow. Although it’s a short autumn season it stays busy with international and domestic travelers.

The other busy season in Banff is from December to February. The holidays are a great time to visit Banff, and visitors travel from all over to have a proper white Christmas. The snow sticks around until April or May, but the high season prices run until late February while people are getting their ski on. To break it down there is the off-season, shoulder season, and busy season Banff. The information is as follows.

Off Season in Banff (November, late March, April, May)

These are generally cold, cloudy, and what some may call “miserable” months. Unless you like the winter, snowboarding and skiing, ice skating, cross country skiing, snowshoeing and all that other fun stuff. If you’re a winter person this is still a time to visit Banff. Low numbers of tourists, low prices, and plenty of snow!

By April you can start biking, and even challenge yourself to a few low elevation hikes (with the proper gear!). We hike Ha Ling Mountain in early April. However, if you’re looking to save money these months are the best time to visit Banff. But I would be lying if I said they were the most beautiful.

The shoulder season months are a wonderful time to visit Banff National Park. The snow is pretty much gone by June and the glacier lakes should be pretty much thawed. The weather is getting better and better in June.

If chasing the fall and seeing the yellow larches is your thing you’ll want to visit in September and October. After Labor Day the crowds start to fizzle out as the kiddies go back to school and summer vacations are over. But it’s still pretty busy in the park during September, just not summer levels. Hiking is still great as the winter gods (typically) haven’t dumped snow yet. That comes in late October.

Unlike many other destinations, Banff National Park has a high season for winter enthusiasts and those after that perfect North American summer getaway. The first, is much quieter than its summer counterpart, but around the holiday’s prices rise and crowds flock to Banff in search of a white Christmas. Those after a ski vacation still visit Banff in February and March and ski runs become busier around some of the holidays like Family Day. During these two winter times, you’ll find higher prices on accommodation.

However, that’s nothing compared to summertime in Banff. Numbers explode between June and August and while I would love to say that because of this it’s not a good time to visit I would be lying. July and August bring about the best weather in the park. Long days and sunshine await you during the summer. The wildflowers are in full bloom and it’s a great time for anyone looking for a summer adventure.

Skip the Organized Tours and Enjoy the Free

While there are many great tours you could book in Banff I can’t deny that they are expensive. For example, a ticket up the Banff Gondola can run anywhere between $50-$70 depending on the season, but you can actually get up to the top of Sulphur Mountain by hiking it for free. Or for instance, the Glacier Skywalk costs $36, but the views aren’t anything to write home about and you can get much better ones by going on a hike.

Banff doesn’t have to cost a ton of money, especially when you’re looking for things to do. We get out multiple times a week and almost never spend any money. That’s because things like hiking and enjoying all the beautiful lakes are completely free!

Think About the Parks Pass You Purchase

You can purchase a Parks Canada pass at any park gate. Or you can buy them in advance online. A Parks Canada Discovery Pass which gets you entrance to all Parks Canada destinations for the year is only $139.40 for a family. It sounds expensive as one payment, but keep in mind that day passes are $10 per person. So if you are a group who is visiting Banff for more than two days it’s worth it to get the full year.

Banff National Park has quite a bit of accommodation for a Canadian park. There are plenty of options from camping, to hostels, to mid-range, and then luxury.

You don’t to camp or stay at a hostel to visit Banff on a budget. Three are mid-range hotels for under $200 and lower depending on the season. If you’re planning to visit around Christmas or in July, August, or September it’s advised to book in advance. The sooner you book the more options you have. If you wait until the last minute you could be left with the more expensive hotels as the cheaper places book up faster.

Weekends in July and August book up quick, but even weekdays during these beautiful summer months will go fast. If you can it’s best to book a room between Monday and Friday.

You don’t have to stay at a hotel though, there are some great Airbnbs in Banff to choose from. Airbnbs with multiple rooms are great for larger groups. Booking one with a kitchen also means that you can save money on food by cooking in.

If you can’t find any suitable Banff hotels or Airbnbs to stay at you can always stay just outside the park. Canmore, while still expensive is a great option that is only 15 minutes away from Banff. Aside from staying in Banff and Canmore there’s also Dead Mans Flats, Exshaw, Harvey Heights, Field, Cochrane, or Golden.

Of course you can camp in Banff too, which can save quite a bit of money. You’ll need to book the popular spots well in advance.

You’ll save a lot of money in Banff if you avoid going out to eat for every meal. An average meal for two out in Banff will cost at least $30 and only go up from there. A great way to visit Banff on a budget is to book accommodation that has a kitchen in it. Then go to the grocery store and cook all your dinners in. Lunches can be easy and be a packed sandwich lunch, and breakfasts are always simple with things like oatmeal or eggs.

There aren’t many grocery stores in Banff, but the two main ones are IGA and Nesters. Of course that doesn’t mean to skip all the Banff restaurants, it just means to limit your eating out to a few times on your trip.

If you find yourself hungry while in Lake Louise there is a small grocery store in the village. It’s called The Village Market and is surprisingly better stocked than you would think. Alternatively, head to Canmore to save money. The two main supermarkets are Safeway and Save-On-Food in Canmore and are slightly cheaper.

Renting a car in Banff is a great option if you are a pair or group of travelers. The best place to pick up the car is in Calgary and drop it back off there. We’ve scored great deals in Banff with car rentals costing us $30 a day in the offseason, though prices can go up past $50 a day depending on the season and what type of car you get. Overall though, I think renting a car is the best way to explore the park.

ROAM transport is surprisingly efficient for a little mountain town. The ROAM bus will take you to some of the hot spots like Lake Louise and Moraine Lake and also shuttle you between Banff and Canmore, which is a great way to save money in Banff when you don’t have a car. If you don’t plan on exploring all over Banff and plan on spending most of your time in Downtown Banff, avoiding a rental car and relying on the ROAM bus is a great option.

Fuel Up Outside of Banff

Gas costs the most in Banff and Lake Louise so to save money on fuel you should try and fill up outside of the park if possible. My favorite place for gas is in Dead Man’s Flats which is cheaper than Canmore. Canmore is cheaper than gas in Banff, and the cheapest place of all is in Calgary.

You Can Always Rent a Campervan/RV!

No one says you have to stay in hotels and rent a car! A very popular option for traveling the Canadian Rockies is in a campervan or RV – especially in the summer! Sometimes the price of a campervan is a better deal than getting a hotel, especially when you factor in the kitchen.

They are great for families and groups o friends and can save a lot on accommodation! Keep in mind though you cannot just pull over anywhere and camp, you will still have to pay to stay at designated campsites with your camper. 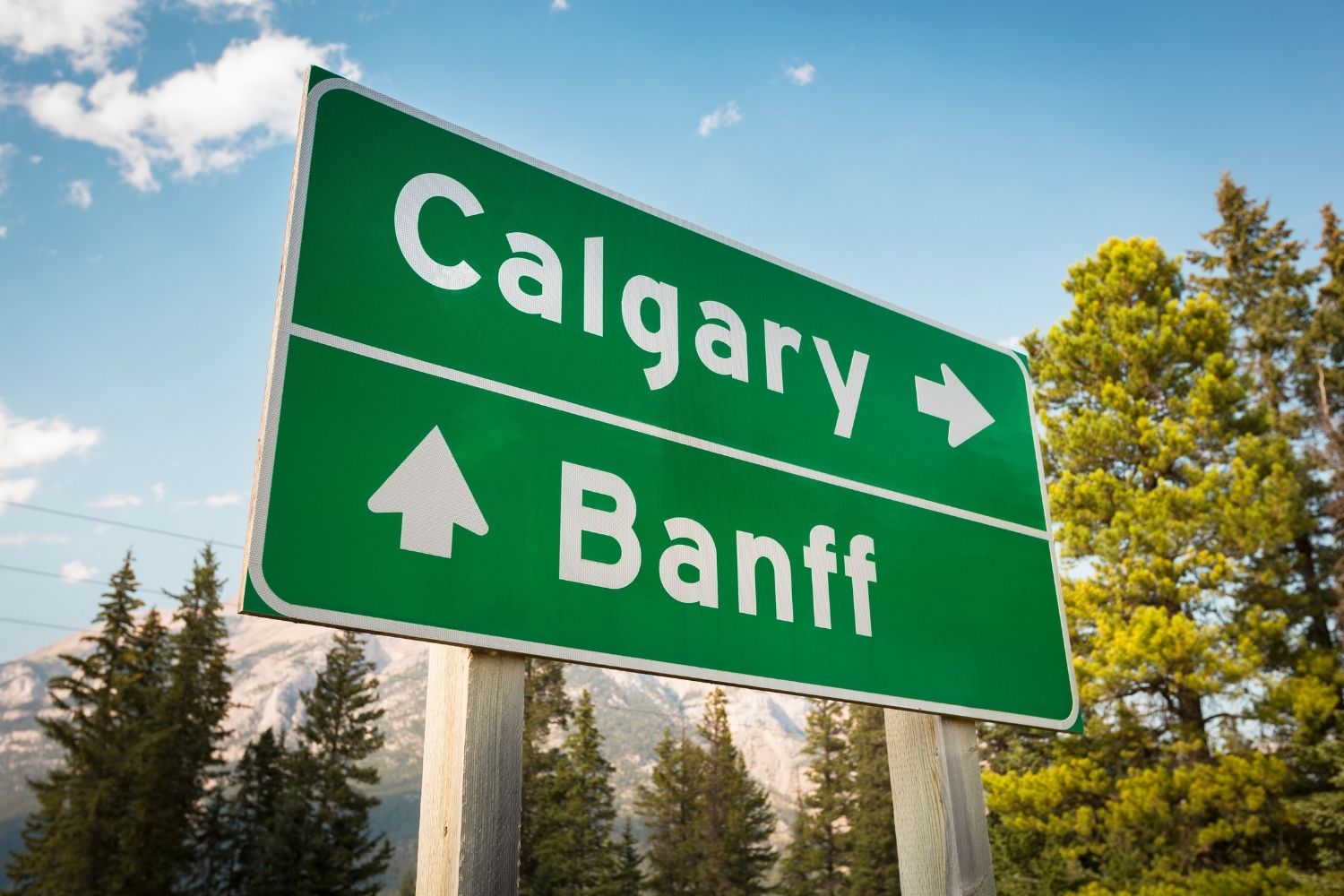 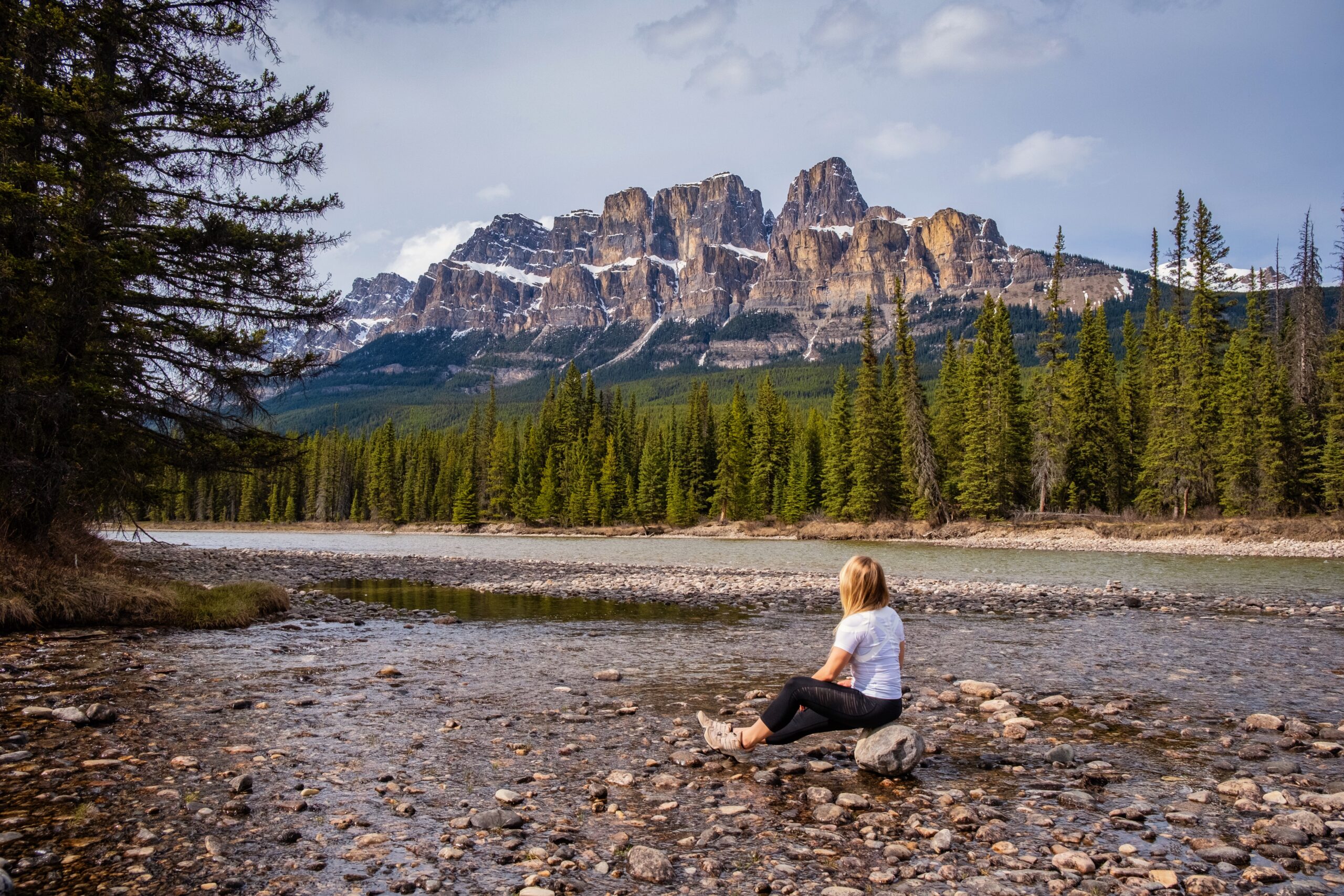